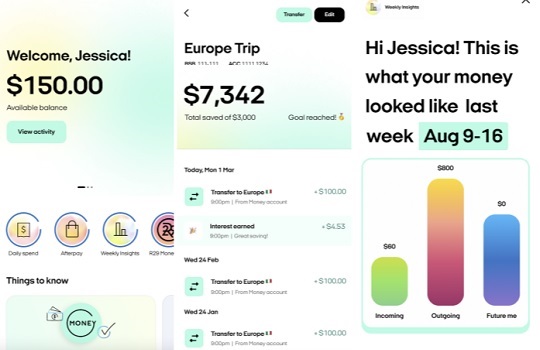 A month later than initially anticipated, Afterpay has announced the official Australian debut of its social media-inspired ‘Money’ app, showcasing the BNPL giant’s latest efforts to expand beyond its pay-in-four roots.

Twelve months in development and four months since the launch of its in-house pilot, the fully realised ‘Money by Afterpay’ app incorporates a mix of traditional banking services fare, including Westpac-backed savings and transaction accounts and NPP-enabled real-time payments, alongside a few novel features, including a “world-first” post-purchase BNPL function.

‘Afterpay Retro’, the first of the so-called ‘Superpowers’ to be offered through the app, will allow customers to retrospectively create Afterpay ‘pay in four’ orders from eligible transactions up to $200 (available to users with a Daily Account set up within the app).

A social media-inspired ‘Money Stories’ feature will feed users “daily and weekly bespoke insights” based on their spending and saving habits within the app and BNPL balance.

“For example, customers will see a comparison of their weekly spend versus the week prior and how much progress they’ve made against their savings goals,” the company explained as part of its announcement.

“What makes the feature unique is the way Money Stories will help inspire action with thought-provoking ideas, tips and tricks that customers can consider.”

The approach, Afterpay said, “directly addresses one of the most critical needs identified by customers – helping them build their money confidence in a simple and easy-to-use way”.

Money’s developers have deliberately taken design cues from the company’s Gen Z, Millennial, and female customers – dubbed by the BNPL as the “Afterpay generation”.

“More than 2,100 hours of conversations, content and insights gathered from Gen Z and Millennial customers – primarily customers who identified as female – has informed the creation of the Money by Afterpay experience.”

Afterpay customers will now have access to one transaction and multiple savings accounts through the app, which leverages Westpac’s banking-as-a-service (BaaS) platform. Customers can create up to 15 separate saving accounts, earning a moderate 0.75 per cent rate of interest up to $50,000 across all accounts.

This also includes access to a physical debit card and digital wallet offering within the app, with neither its deposit nor savings accounts attracting fees, Afterpay said.

“We are particularly proud to bring this partnership with Afterpay to life,” Westpac chief executive, specialist businesses, Jason Yetton said in a statement.

“Westpac Banking-as-a-Service will provide Money by Afterpay customers an innovative way to digitally bank underpinned by Westpac’s strengths of safety, security and trust.”

Afterpay has been in a formal partnership with Westpac since October 2020, leveraging the big four’s banking license to enable the Money app’s new transaction and savings accounts.

“With more than 3.6 million Afterpay customers in Australia and more than 1 million of those customers in our sweet spot audience for this offering, we have the ability to introduce Money by Afterpay as the way to look after their money.

Hatton added that the debut public launch of the Money app is “only the beginning as we help our customers build their money confidence through an ongoing roadmap of new features and useful, inspiring content”.