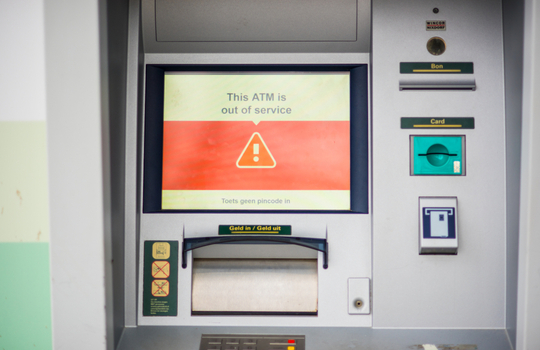 The latest figures from APRA reveal a substantial drop in the presence of Automatic Teller Machines (ATMs) and EFTPOS terminals across Australia, with banks looking to scale back dedicated service points in favour of cost-efficient, mobile-based money transfer apps and non-branch partner services.

Data compiled by the industry watchdog showed a 16 per cent decline in the number of ATMs in Australia since 2017, representing a loss of 2,255 terminals in two years.

Despite the increasing use of NFC-based contactless payment services (both mobile and card) by Australian customers (with card-based payments nearly doubling between 2012 and 2017, according to AusPayNet), the country has seen a four per cent decrease in the presence of EFTPOS terminals (a loss of 33,461 terminals) since last year – though this still represented a slight bump on 2017 figures.

Though not wholly unexpected, the APRA data also showed a loss of nearly one in 10 branches across Australia, as banks continue their steady retreat from costly brick and mortar service points. However, this was more than offset by the increase in “other face-to-face points of presence” – defined as non-bank service points that have partnered with banks to provide proxy banking services.

The presence of non-branch ‘face-to-face’ partner services, including Australia Post’s Bank@Post (which allows banking customers to withdrawal, deposit, and make balance enquiries through AusPost stores), increased by nearly 17 per cent across the country.

Country and remote areas saw the most substantial increase in these non-branch partner services, accounting for 721 (93.5 per cent) of the 771 increase in the number of these service points since 2017 – a tacit acknowledgement by banks of the importance of face-to-face service points for customers in country areas.

Unsurprisingly, the bulk of bank branch closures were in smartphone-saturated metro areas, accounting for nearly two-thirds of total losses (304 branches). By comparison, remote areas collectively saw just 11 branch closures, a loss of just five per cent of their total.

APRA’s Authorised Deposit-taking Institutions’ (ADI) Points of Presence survey takes an annual snapshot of face-to-face and electronic banking service channels present across Australia and its external territories in June of each year.