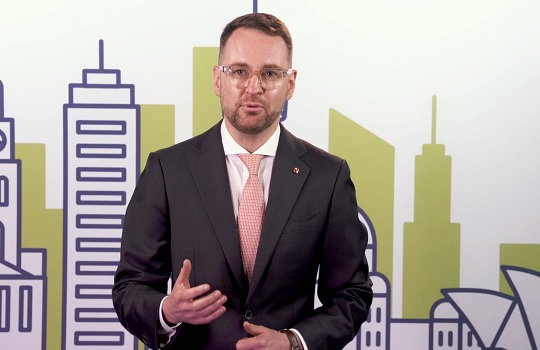 Senator Andrew Bragg has again urged Australian industry and governments to “capitalise on the demise of Hong Kong” as a regional centre of finance and technology, believing China’s special administrative region (SAR) will no longer retain its primacy as a regional financial hub.

Speaking at FST’s Future of Financial Services Sydney virtual conference on Wednesday, Bragg, who heads the Senate’s Select Committee on fintech and regtech, said Hong Kong should be the “first place” Australia looks to expand its financial footprint in the region.

“We’d be mad to sit idly by and allow such a lucrative share of the market to leak to Singapore and Tokyo,” Bragg said.

“Australia as a finance sector [hub] has been a dream for decades.”

Whilst acknowledging its continuing role as a “gateway to China”, social unrest triggered by the PRC Government’s increasingly interventionist role in Hong Kong has no doubt seen the SAR lose its lustre as a regional centre for multinational financial services organisations and innovators.

Hong Kong’s place as a financial hub has waxed and waned over the last year, earlier this year falling from a high of third to sixth spot on the Global Financial Centres Index (GFIC) – overtaken by Tokyo, Shanghai and Singapore.

The most recent half-yearly GFIC rankings saw Hong Kong recover one spot to sit at fifth place, again overtaking Singapore which fell back to sixth.

Australia’s own financial centres, Melbourne and Sydney, currently stand at 27th and 32nd place respectively on the Index. Sydney, traditionally considered the centre of Australia’s finance sector, fell 12 spots in the rankings, behind Melbourne, which fell just six.

Bragg noted that a previously announced 15-member advisory group, which offers policy advice for cabinet ministers, will muster “some of the best business brains in the country” to help capitalise on Hong Kong’s diminishing role as an Asia-Pacific financial centre. The group is headed by former Macquarie Asia chief, Andrew Low.

“I want them to come up with ideas so we can bust through bureaucratic roadblocks and produce policy advice for cabinet ministers,” Bragg said. He added that the group would also serve to advise the Prime Minister’s special envoy for global business and talent attraction, Peter Verwer.

Bragg, a former director of policy at the Financial Services Council, urged for a creation of a “more tax-friendly regime” for local fund managers to help manage foreign capital and attract investment locally.

“More could and should be done to make funds management tax and other rules more investment-friendly,” he said.

Special envoy Verwer himself will also lead a new “strike team” charged with luring international businesses to Australia, with a wide remit to draw talent from the financial services, fintech, advanced manufacturing, and health sectors.

According to Bragg, Verwer’s team will specifically target talent from Hong Kong, the US, the UK and Singapore.

While building Australia as a global finance sector hub has “been a dream for decades”, Bragg said, the dream will only come to fruition if the Government is prepared to “change the way [Australia] regulates and administers tax identities”.

“We made need to offer tax deals to companies to lure them to Sydney,” he said.

Super industry a potential next target of CDR adoption

Superannuation appears to be in Government’s crosshairs as it looks to the next major industries to draw into the Consumer Data Right scheme post-Open Banking.

Echoing recommendations made in the Senate Committee’s FinTech Interim Report, Bragg said he was keen to see the imminent extension of the CDR to superannuation providers.

The ACCC – which, subject to Government legislation, may in fact lose its oversight power of the CDR – has confirmed the energy sector will be the next major industry (after the banks) to join consumer data-sharing regime. Both the super and insurance industries are yet to undergo a formal sector assessment by the regulator – the first step to extending the scheme to new industries.

Bragg said the Hayne Royal Commission exposed “an ugly snapshot of greed, malpractice and a reluctance of regulatory action”, providing greater impetus to draw the wider financial services sector into the CDR as quickly as possible, with the hope that it would empower consumers with more product choice and ease of movement between providers and funds.

“Structural flaws within the [superannuation] system mean many Australians have been let down,” he said.

“Right now households pay $30 billion a year in super fees. That’s more than the $27 billion Australian households pay on their energy bills or the $12 billion we spend on water bills.”

“The beauty of CDR is that it cuts through all of the industrial archaeology.”

He stressed that the “new rails for super” will consist of ‘stapling’ – that is, one super fund tied to an individual, rather than new funds created each time an employee starts a new job – “plus” the CDR.

“This will stop the creation of millions of unintended multiple accounts and throw around $2.8 billion back into the savings pool over the next ten years.”

Bragg also sees the possibility of “plugging” the CDR in to other countries’ data sharing regimes.

He sees the Singapore Government’s Infocomm Media Development Authority (IMDA), “which has evolved rapidly to a single executive branch for the data economy”, as a useful template for Australia in extending the regime globally.

“It safeguards the interests of consumers and it fosters pro-enterprise regulations,” he said.

“Their ambition is to build the world’s first ‘global data exchange’. We’re going to have to lift our game to compete with that.”

Zurich Australia appoints new chief from within, as Plant reroutes to IAG