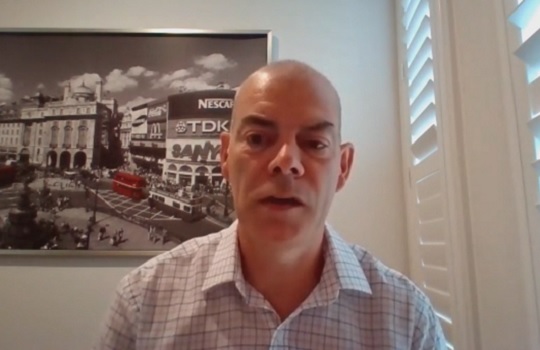 Medibank’s investment in its all-cloud infrastructure program, despite a major retooling along the way, has paid rich dividends for the health services group, with “efficiency gains” and “capability uplift” delivering $12.3 million ROI to the company – doubling an initial investment of $6.2 million over the four-year transformation timeline.

Speaking at FST’s Future of Insurance 2021 event on Tuesday, Craig Rowlands, Medibank’s general manager of information management, tracked the health insurer’s cloud transformation timeline from 2017 to today, which, “from a data point of view”, has seen Medibank shift “100 per cent” to cloud – with the vast majority of data workloads now hosted on AWS.

Rowlands noted the wholesale data migration and subsequent leveraging of cloud tools, including AWS’s machine learning platform SageMaker, and better utilisation of data assets, has seen significant “capability uplift, a reduction in risk, and increase in productivity”, giving the health insurer a notable return on its cloud investment.

However, the success of Medibank’s most recent cloud and data transformation program, known as MARS, belies the fact that it rose from the ashes of a past cloud failure.

“When I joined Medibank [in 2017], we had a data strategy and roadmap in place. But I felt that [they] weren’t quite right for what we were looking for.”

This original cloud migration platform, known as Radar, faltered from the start.

“I would call it a failed first go on the cloud,” Rowlands said.

The reason, he noted, was a preponderance of sequel (SQL) servers on the Radar platform – most of which were hosted on AWS, despite, as he acknowledged, being better suited to a federated Microsoft cloud server – caused significant governance issues for Medibank’s data team.

“In laymen’s terms, [SQL servers] breed like rabbits,” Rowlands said. This progressive siloing of data and toolsets, spread across multiple data warehouses, would ultimately bedevil the Radar platform from the get-go.

“We had a warehouse for AHM [Medibank’s budget subsidiary]. We had another warehouse, [our on-premises] Teradata, for our Medibank brand… and we had more than 50 separate tools on cloud.”

“And within that 50 plus, we were looking at seven data visualisation BI [business intelligence] tools. “Things like data mapping: we had erwin, we had Visio, we had Sparx, and we had Excel, all four of them, and that’s not very good for us from a simplicity outcome.

Rowlands’ first request to his team was to reduce down to a defined maximum – later set at 26 tools – covering data, analytics, and visualisation.

He gave notice to his team: “We’re only going to use one or two of these tools going forward. From a strategic point of view, we’re can’t have every flavour that you can think of.”

By 2018, a decision was made to go all-in on AWS cloud, likewise encouraging an aggressive simplification and consolidation of data assets and toolsets, a push to “resolve legacy outcomes”, and a recognition of the need establish strategic cloud partnerships.

“Embedding further outcomes with AWS is an example of moving away from the failed [Radar platform], to what we call MARS,” Rowlands said.

“By 2019, we went from effectively managing four warehouses down to one platform.

“And we removed Radar successfully.”

Rowlands noted that the SQL servers for the AHM brand “have predominantly gone over [to AWS] – the last elements of which are currently being “finalised”.

The reasons to push for obsolescence for these BI tools were, for Rowlands, manifold.

Firstly, he stressed, as toolsets age, they become harder to maintain, making sensitive customer data housed on the platform sitting ducks for cyber-attackers.

“We wanted to make sure we were leveraging the funds to be able to continue this journey over this time, ensuring Medibank could get a return on investment through data.”

Yet, beyond the simplification and cost-cutting objectives, Medibank also realised considerable data security benefits from migration.

“We can safeguard what we class as ‘crown jewel’ data assets – that is, sensitive data that we’ve classified both from a PII [personally identifiable information] and PHI [protected health information], general ledger. and commercial contracts.”

“We house this in one area, and that’s under strict user access management. And, obviously, our public information is a lot more accessible to individuals.”

Out of this migration, Rowlands said, “we’ve got security and we’ve got operational excellence, because we’ve standardised and automated much of this through frameworks as we’ve gone through.” 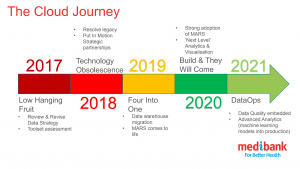 Digging for gold on MARS

Already, Medibank is reaping the rewards of its three-year journey to MARS, enabling analytics engines to deep dive and extract insights into once untapped customer, regulatory, and financial datasets.

“From a data quality point of view, we now have complete [visibility]. What left the source system and what landed in the warehouse – and having a historic view of what should land in the warehouse – means that we’ve got good, solid, accurate information to base decisions on to do our analytics and reporting going forward.

“We use AWS Macie, which automates data discovery, for sensitivity checks. We also use AWS Deequ to do profiling, so we can get really accurate information to support things like APRA reporting, risk equalisation and other really critical reporting.”

“We went down into the depths of that data and determined that that product was profitable for individuals who were under 75, but not for those over 75.”

“Armed with that information, we could provide that back to the actuaries and say, ‘You need to price this accordingly to make sure we’ve got the right outcome’.”

However, it is the platform’s ability to advance real-time analytics that has delivered significant value to customers and healthcare recipients, particularly during the Covid crisis.

This real-time “streaming of events” – or stream processing – which covers about 15 to 20 per cent [of workloads], Rowlands said, has allowed Medibank to fast-track responses and properly allocate resources to on-the-ground needs.

In the case of telehealth, for example, this has meant “putting more nurses on-call to respond to such things as domestic violence calls and suicide calls that are coming from our clients”.

This also includes real-time deployment GPs and other “skilled personnel” to align with peak and trough demands.

Off the back of its successful MARS re-platforming and data migration project, effectively a ‘data lakehouse’, Rowlands said – “a necessary bucket where we bring all of the information in raw, matched like for like from source systems” and housed on AWS Redshift – Medibank is leveraging its rich data analytics capabilities this year to pursue aggressive service personalisation.

This will be enabled through “DevOps – with a data slant”, Rowlands said, “embedding things like advanced analytics and machine learning toolsets and products”, including SageMaker.

“One of the early outcomes that we’ve got is an outbound marketing campaign for our customers, which is very personalised, which is always-on, because the machine learning algorithm looks at the predictability of the data that’s being used and the variables that are being used and says that’s fallen below a threshold”.

He envisages a platform akin to Suncorp’s attempted marketplace offering – aborted in 2019 by the then acting chief executive Steve Johnston, who considered the project “too ambitious relative to where our business is at and the funds we have available to invest”.

“Clearly, with all of the different information that we’ve got available from insurance, from life, from travel, diversified ones outside of our health insurance, and now car and home insurance, this could be a one-stop-shop,” Rowlands said.

“People can come here and get the information they require, so they can purchase stuff rather than being sold stuff.”

“That hopefully means reductions in things like complaints and upset for customers, while increasing service and delivering better claims outcomes.”