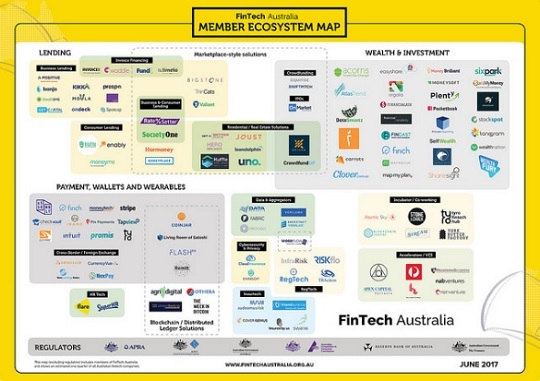 The map lists 119 members of FinTech Australia (a quarter of all fintech companies operating in Australia), divided accordingly into various industry sub-sectors, as well as the country’s key financial services regulators.

“The map is arguably the best visual representation yet of our fintech industry, which is the largest start-up sub-sector in Australia, according to the most recent Startup Muster survey,” said FinTech Australia CEO Danielle Szetho.

For Szeto, the map illustrates the increasing prominence of Australia’s burgeoning fintech market in the global market, establishing Australia as a genuine rival to the regional fintech powerhouses of Hong Kong and Singapore.

Last year Australia had Asia’s largest pool of funds under management – and the sixth largest in the world, according to FinTech Australia.

The map reveals the continuing dominance of wealth and investment-based fintechs in the market, alongside consumer and business lending, cementing their place as Australia’s two largest fintech sub-sectors for the second year running.

Yet, according to Szetho, the map also exposes the numerous other nascent areas of Australia’s fintech ecosystem, including payments, wallets and wearables, blockchain/distributed ledger, regtech, insurtech, data aggregators and cybersecurity.