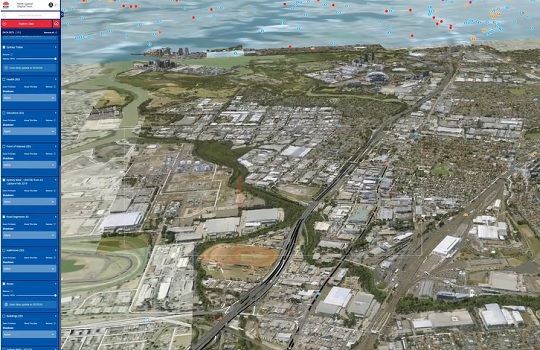 Within the next 10 to 15 years, every government-funded infrastructure project should move to adopt cross-functional digital twins. This is one of several key recommendations from Infrastructure Australia’s (IA’s) ambitious five-yearly report.

IA, the Government’s independent infrastructure adviser, is not alone in this call. Industry is also slowly embracing these digital replicas to improve decision-making and slash planning costs. However, the significant social and economic benefits of digital twins are not always well communicated by government.

Digital twins are virtualised replicas of physical assets in the digital world. On the small scale, this might mean a machine or vehicle, but digital twins are increasingly used today to replicate entire buildings, transport systems or entire cities in 3D or even 4D (including time) visualisations.

These twins incorporate spatial data, including both static and live data steams (increasingly, from Internet of Things, or IoT, sensor technologies), to display, for instance, real-time traffic flows, HVAC system operations, and even mass movements of pests, depending on the use-case at hand.

“A digital twin is a conceptual environment where large volumes of data are federated, visualised… and used to improve decision-making. Other dimensions such as cost and sustainability can be easily integrated for a more complete picture,” IA states.

The Federal Government estimates the adoption of “best technology practices” could realise up to 15 per cent in productivity gains and more than 5 per cent cost savings from infrastructure planning, delivery, and operations, as well as supporting decision-making within government and ecological sustainability.

While 5 per cent might not sound like much, consider that Australia’s largest infrastructure project – WestConnex in NSW – is worth a cool $16 billion; adopting breakthrough technologies like digital twins, at least in this instance, could represent a cost saving of around $800 million to taxpayers.

Australian governments’ record on digital twins – particularly regarding oversight, regulation, and development of the technology (not to mention their management of the tsunami of data these systems collect via IoT technologies) – remain mixed, according to critics.

Private sector players in this space who deal with governments have a laundry list of demands for authorities to lift their game.

In August this year, the Australian Information Industry Association (AII), a peak body representing the local ICT sector, called for a national approach to the emerging digital twin ecosystem.

The AIIA is lobbying for clear standards and governance around digital twin data – such as models, management, integration, security and privacy – as well as improving accessibility and setting open data protocols. This would give consistency to “deliver maturity frameworks, templates, risk frameworks, and methods for increasing data safety”.

To accelerate this standardisation push, the AIIA has called for the establishment of a dedicated Office of National Digital Twin, an associated industry-government-academic consortium, an infrastructure standards roadmap, and a skills framework.

Among the standouts in Australia’s burgeoning digital twin industry is Willow, which sells its digital twin software to governments and private businesses across the globe.

Head of strategic projects Conrad Winter says Willow staff have worked “government side” with Transport for NSW and the North East Link Authority in Victoria, and on the delivery side for multi-billion-dollar government public-private partnership (PPP) projects on the Melbourne Metro rail line and Cross River Rail in Queensland.

While commending digital twin deployments in NSW and Victoria, Winter bemoans the lacklustre efforts of governments to properly translate the benefits of ‘digital twins’ to vested public agencies, industry, and the wider public.

“There’s a lot of activity in the government sector related to digital twins and IoT, but it’s not always communicated well across the different agencies and divisions of government.

“Government is still on a journey to really understand what a digital twin is, how it can be best utilised, and the real benefits it can deliver in the operations and maintenance of its infrastructure assets.”

For Winter, digital twins are often understood as a little more than a simple analogue of the physical object or space without grasping its wider implications and use cases. The concept, he says, offers more than a data visualisation app representing, for instance, “how many customers are at a railway station”.

“It’s a platform which integrates all data sources in the virtual world to manage and optimise the physical world.”

This, he adds, should happen at the start of the asset creation lifecycle to deliver – and indeed fully realise the benefits of – real-time asset management for ongoing operations and maintenance.

“Without that, you’re always looking at lagging data. You can’t easily do predictive maintenance and stay ahead of issues,” he says.

Crucially, whoever operates the asset not only needs to be on board with the idea of ‘digital twinning’, but also has the technology systems to support its operations.

Winter cites one particular project with an “unbelievable” number of separate platforms and IoT systems. Upon completion, the project was simply handed over to the operator in the form of a “bucket of USBs and disks”.

This handover process is crucial, he stresses. Moreover, enabling the twin through an interconnected, cloud-based network, rather than a traditional, siloed system, is critical to ensuring input data is meaningful, up-to-date and, indeed, continually relevant to the changing dynamics of any project.

Beyond just a dashboard

That lack of cross-compatibility is of particular concern when you consider the overriding aim of most digital twin projects is to democratise information, says Genéne Kleppe, chief executive and founder of South Australian-based technology company, Digital Twinning Australia.

For Kleppe, a digital twin should be “much more than just a dashboard”.

“[Being] 3D replicas of physical assets, by hovering over it, everyone [should have] access to the same data and be able to interact with it.”

Recently, she joined an Australian subgroup of the International Organization for Standardization (ISO) to help develop a set of global standards for digital twins. She was the only representative from the private sector to join the group.

Kleppe wants the Australian Government to set a high standard as a regulator, recognising digital twins as an important tool to improve environmental, social, (and corporate) governance.

As a regulator, governments can harness digital twin technology to check the provenance of materials used within a building, and accelerate delivery of net-zero emissions targets, she says.

‘Caching in’ on the data

Governments’ procurement processes assume buildings are cheaper to run without incorporating a digital twin early, for example, from the architectural and engineering design stage, Kleppe says.

“They also don’t know how to convert value from the IoT data and transition all the sectors involved in procurement through to maintenance into this digital world.

She insists there needs to be “real leadership to make this shift”.

As an industry leader, Kleppe has invested in uncovering different ways to measure societal and economic impact, foundations she says are necessary to realise net-zero objectives.

She’s currently working with a K-12 school in Adelaide to guide them on how to run the school off-grid. As a start, primary school students there have already worked out the solar panels on a new building would only power their laptops there for four hours.

That makes digital twins sound data-hungry, but Kleppe insists they are not.

“IoT data is intelligent. It allows us to work with data that is meaningful rather than having to wade through mountains of mostly useless stuff. Digital twins allow asset owners to focus on critical assets and, therefore, critical data, not all data.

“How assets perform, for example, temperature, vibration, and [pedestrian traffic] flow, are critical for user and customer experience.”

Both nationally and globally, various groups are striving to transition to Industry 4.0 faster, Kleppe says. Healthcare and pharmaceutical industries are leading the charge for digital twins. This enthusiasm will inevitably lead to fragmentation.

With Infrastructure Australia’s leadership, and with states and territories pushing for digital twins, Kleppe says universities have increased opportunities to pursue collaborative research in this space.

The NSW Department of Customer Service’s spatial operations director, Wayne Patterson notes that there are “literally thousands” of digital twins currently in operation across the globe, ranging from a virtual representation of a single building to one covering the entire island-state of Singapore.

The global digital twin market was worth $4.2 billion last year and is expected to explode to $65 billion-plus by 2026.

Peterson says the incorporation of spatial information positioning technologies like sensors and aerial images is a “gamechanger” in the digital twin space.

That is because it situates these digital models in their real-world location, offering a foundation for a powerful ecosystem of data across government departments, as well as the private sector and industry.

NSW has been an Australian trailblazer in the development of metropolitan digital twins, launching one of the world’s largest spatial digital twins last year.

The NSW Spatial Digital Twin currently covers the Western Sydney region, with an aim to boost its capacity to cover the whole of NSW.

“The spatial digital twin is a step-change in how the Government plans and delivers services to improve people’s lives in NSW,” Patterson says.

“Both Victoria and Queensland are developing similar models, which helps to facilitate interoperability across borders.”

“We are an increasingly data-driven society, in which spatially enabled digital twins are the key to smart precincts, smart cities, smart regions and ultimately a smart state which, of course, is our goal,” Patterson says.