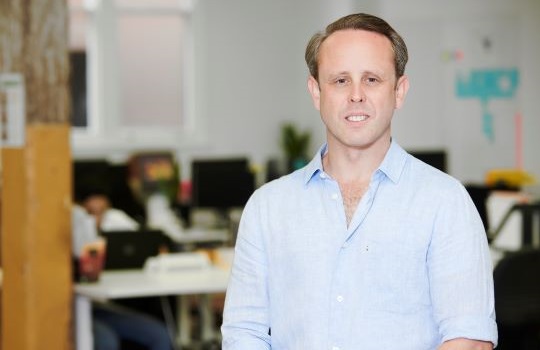 Hogarth had most recently served as the ANZ’s Chief Architect since September 2020, leading the bank’s Centre of Excellence for architecture and engineering.

As CTO, he will maintain oversight of ANZ’s architecture alongside the bank’s technology function, tasked with driving “ongoing improvements across engineering and further [extending] ANZ’s move towards common technology platforms,” ANZ said in a statement.

“I’m really pleased to have Tim in this new role, which we created to reflect the importance of technology leadership within my team and across ANZ more broadly,” he said.

Richardson, a 30-year veteran of financial services IT, most recently served as Chief Technology Officer of the formerly CBA-owned Colonial First State (CFS) — a role he held for just over two years across a 17 year-tenure at CFS.

He steps into the role vacated by Steven Willson, who took up a new position at Dubber, a SaaS-based call recording vendor.

Richardson played a key role in the separation of CFS from CommBank, overseeing a team of more than 600 IT professionals.

GSB Chief Executive and Managing Director Paul Lewis said he was “pleased to have someone with [Richardson’s] experience” joining the bank.

“We’ve seen great early results from our IT investments over the last couple of years, including our cloud migration work and our new home loan system Lendfast,” Lewis said.

“Tom, with his mix of IT understanding, relationship building skills and long experience with digital transformation projects, is perfectly placed to make sure our customers get the maximum benefit from that investment.”

Richardson said he was “pleased to join an organisation that has a willingness to work at speed and nimbleness that you just don’t get in bigger organisations.”

“The opportunities around data are where the interesting work is. It’s about generating value out of what we’ve done, then using data to deliver further value for customers. We’ll also be looking for the right opportunities to work with fintech organisations that can add value to Great Southern Bank.

– FinTech Australia, the fintech industry’s peak body, has appointed Andrew Porter as its next Chief Executive.

Porter steps into the role vacated by Rebecca Schot-Guppy back in August 2021, with the latter moving to a new role at Firemark Ventures – the $75 million venture capital fund run by IAG.

She added that the appointment marks “the next phase in FinTech Australia’s work of stewarding the growth of the industry”.

FinTech Australia said the appointment comes at a key point for the organisation, with it set to play a “leading role in dealing with the government on policy matters regarding new payments technology, cryptocurrency and blockchain innovation”.

Porter said he was honoured “to lead and represent one of Australia’s key voices and influencers in the vitally important fintech industry”.

“I have been given the opportunity to give back to the industry I have loved being a part of from its earliest days, and to help foster its growth at a critically innovative juncture.”

– Westpac has trimmed down and reshuffled its executive team, slashing the size of corporate functions by 20 per cent in a cost-cutting drive.

The restructure will see the creation of two new divisions within Westpac – Corporate Services and Customer Services and Technology.

Wespac said the moves would “improve end-to-end accountability for customer products and services” and “involves moving support services including HR, finance and technology to the businesses and customers they support.”

The roles of Chief Risk Officer and Group Executive – Financial Crime, Compliance and Conduct will be combined, with Ryan Zanin, a Fannie Mae alum previously based in New York, assuming the new combined role.

Christy most recently headed 86 400‘s home lending business, leading the design, development, and deployment of the neobank’s mortgage business and helping to grow its loan book value to more than $1.3bn.

“Melissa’s experience in working with technology-focused partners and vendors will be highly valuable in delivering AMP Bank’s growth strategy,” AMP said in a statement.

“This strategy includes strengthening the bank’s home lending proposition for customers and brokers, and its transformation into a technology-enabled, service-led business. Automated, digital self-service is central to this approach.”

AMP’s Director of Home Lending, Michael Christofides noted Christy’s “proven technology expertise” as a boon for strengthening the bank’s technology offering for both customers and brokers.

“Melissa will be able to build on the significant progress we’ve already made, with our simplified bank platform architecture and modernised core system delivering [around] 35 per cent improvement in productivity and 70 per cent increase in home loan origination.”

Currently Head of ANZ’s Commercial Bank Transformation, in her new role, Smith will be charged with building out and transforming ANZ’s retail broker business.

Commenting on Smith’s appointment, Katherine Bray said: “Natalie has outstanding leadership skills coupled with a deep understanding of the power of using customer relationships and data to help drive growth.

“There is no doubt she will be a terrific addition to both ANZ’s Retail and Broker business, and quickly establish herself in the country’s burgeoning broker industry.”

– Zurich Life & Investments has appointed Ahmad Racheha to the newly created role of Head of Digital and Member Engagement. The role will sit within Zurich’s group insurance team.

Racheha joins Zurich from Aware Super, where he served as Head of Digital, leading the super fund’s digital transformation program.

He will report to Darren Wickham, who heads up the insurance team.

Commenting on the appointment, Wickham said: “Ahmad’s deep experience in using technology to engage customers will help our super fund partners to engage their own members.”

O’Connell, who commences in the new role on 1 February 2022, joins IAG from Suncorp, where he led the commercial and intermediated portfolio, responsible for pricing, and profitable growth strategies.

“Darren is a strategic thinker, trusted coach and mentor, and someone who likes the challenge of building and sustaining growth. I know he will help us achieve our plans and shares our vision on what we can deliver for our partners, customers and our business,” IAG Group Executive IIA Jarrod Hill said.

Marjoribanks, who joined IAG as a consultant from PwC in early 2020, has been Acting EGM, Product Pricing and Governance for IIA since late 2020. She will move into the role permanently this month.

“Over the past 12 months, Christa has been a key member of the IIA leadership team and has been closely involved in setting up our division. She has been instrumental in uplifting pricing practices and governance,” Hill said.

– The Financial Services Council (FSC) has appointed Deputy Chief Executive Blake Briggs to run the peak body in the interim following the departure of Sally Loane.

Loane left the FSC in December after seven years leading the organisation.

FSC is currently seeking a candidate to fill the Chief Executive role, a process it started in October last year when Loane’s forthcoming departure was announced.

– The Reserve Bank of Australia (RBA) has appointed Karlee Hughes as Head of its Human Resources Department, returning to the RBA after a stint at NAB.

Hughes replaces Michael Andersen, who has been appointed as Chief Representative Europe in the Reserve Bank’s London office after four years as Head of Human Resources. Hughes assumed her new role up the position on 17 January 2022.

She has previously served as the RBA’s Head of Business Engagement, and most recently as Chief People Officer, Corporate and Institutional Bank, at NAB.

Prior to NAB, she held senior risk and compliance roles at Westpac, ANZ and the Commonwealth Bank, including Group Head of Three Lines of Defence at Westpac and Head of Risk and Compliance, Superannuation, Investments, Platforms and Operations at BT Financial Group.

– The Australian Competition and Consumer Commission (ACCC) has appointed Gina Cass-Gottlieb for a five-year term as Chair, commencing on 21 March. She is the first woman appointed to the role of ACCC Chair.

Cass-Gottlieb succeeds Rod Sims, who is stepping down after more than 11 years leading the competition watchdog.

She has previously held roles with the Reserve Bank of Australia Payment Systems Board and the Financial Regulator Assessment Authority.

Stephen Benton will step down as Chief Executive of eftpos, as the payments company moves forward with its plans to merge with BPAY and the New Payments Platform Australia (NPPA).

Benton steps down after nearly four years as eftpos chief. Prior to this, he was Head of Consumer Finance, Emerging Businesses and Payments at Westpac.

“I leave eftpos in good hands and with a great leadership team”, Benton said in a notice posted on the eftpos website.
“Our company is rapidly evolving into a leader in the delivery of digital services, beyond payments. eftpos now has a clear strategy for growth and success, led by our purpose – Good For Australia.”

Silk fills the role vacated by Christian Hawkesby, who became Deputy Governor of RBNZ in January 2022.

The RBA has also appointed Nigel Prince to a newly created fixed-term position of Strategic Advisor to the Governor.

– Suncorp New Zealand has made several changes to its executive team:

Jane Brewer has been appointed EGM Claims and Operations, stepping into the role from July 2022. Brewer, a 15-year veteran of Suncorp NZ, most recently as EGM Technology and Transformation.

Campbell Mitchell has been appointed EGM, Customer Brand and Distribution. Mitchell joined Suncorp in 2017 as EGM Customer Marketplace and led the development and delivery of customer strategy before taking on the role of EGM Claims as part of an executive rotation program.

Suncorp New Zealand Chief Executive Jimmy Higgins said: “We have taken the opportunity in the last year to put a strong team in place who can lead the continuous improvement of our business and deliver great experiences, value and outcomes for our customers”.

Bendigo Chair, Jacqueline Hey said Weekes’ “experience across the spectrum of financial services is highly regarded by her peers.”

“She will be able to offer valuable insight as the Bank continues its transformation agenda and pursues its goal of being Australia’s bank of choice,” Hey said.

Goodsell is the national head of WHS Policy and Manufacturing at Australian Industry Group (Ai Group), as well as Chair of the NSW Industry Capability Network and a member of the NSW Skills Board. He was formerly a member of Safe Work Australia.

“Mark is a great addition,” icare Chair John Robertson said, adding that McIntyre had provided great input over many years, particularly in her role as Chair of the Board’s Technology & Data Strategy Committee and a member of the Audit & Risk Committee.

– The Australian Financial Complaints Authority (AFCA) has appointed former Suncorp Insurance Chief Executive Gary Dransfield to its board for a three-year term.

Dransfield is currently Hollard Insurance non-executive Director and Chair of the panel advising the NSW Government on the design of decennial liability insurance for apartment buildings.

He was previously President of the Insurance Council of Australia.

“Mr Dransfield will bring a wide range of skills from his distinguished executive career and his experience as a non-executive director,” AFCA Chair John Pollaers said.

“We particularly welcome his extensive experience in general insurance, which represents 24 per cent of AFCA’s business.

“We will benefit both from his deep business experience and from his career-long focus on the customer.”

– SBS Bank has appointed Sarah Brown to its board of directors, replacing long-serving director Anne McLeod.

Brown was previously on the Southern Institute of Technology Council for 11 years, six of them as Council Chair.

Appointed to the SBS Board in January 2022, Brown is currently also on the Boards of PGG Wrightson Ltd and Blue Sky Meats Ltd. She has also served on the Boards of Electricity Invercargill Ltd and PowerNet Ltd.