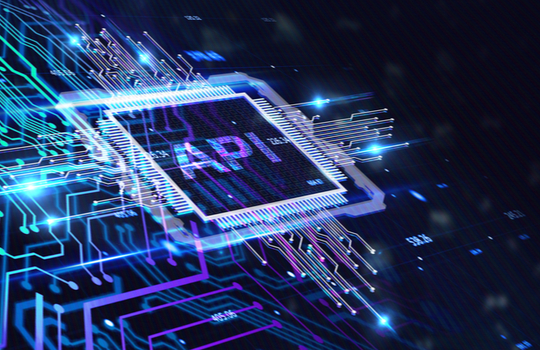 Almost half of Open Banking Data Holders provided CDR transaction data in less than a second, on average, up from just one in three Data Holders six months ago, according to the latest statistics from Frollo’s Open Banking platform.

Twenty-two out of 45 Data Holders were able to provide their data within one second, with an average speed of 0.87 seconds for the supply of transactions data – which includes transaction ID, status, date and time, and amount.

Neobanks once again topped the list as the quickest across the three most popular Open Banking APIs (APIs which provide data on banks’ ‘Accounts’, ‘Bulk Balances’, and the ‘Transactions for Accounts’), with Bendigo Bank-owned Up and NAB-owned 86 400 leading the pack.

Up, for instance, was able to deliver accounts data (including accounts status and product category data) in just 0.12 seconds – five times faster than the next quickest Data Holder, Macquarie Bank, at 0.62.

Victorian challenger bank Bank First was the laggard in this category, taking 3.84 seconds to deliver its accounts data, while ANZ was also a surprising straggler at 2.08 seconds.

Among the big four banks, Westpac was notably behind the average on all three measures of response time, ranking, perhaps most strikingly, 32 out of 45 banks in the delivery of transactions data.

CBA, on average across the three Open Banking API categories, was the quickest of the big four banks.

Up was not only the quickest, on average, of all the banks measured but also among the most reliable, ranking alongside Judo and imb at the top for the successful delivery of CDR data once an ‘API call’ (or data request between APIs) is made.

Frollo notes that Data Recipients connect to a number of different APIs (Application Programming Interfaces) when collecting CDR data from a Data Holder.

Those institutions that are able to deliver this data faster and more reliably, it says, ultimately offer a better experience for their customers.

According to Frollo, to date, more than 25 million Open Banking API calls have been made.

Gaps in the data

Frollo, for the first time, also assessed measures of data ‘completeness’ in CDR transactions, reviewing 11 of the most popular Data Holders for their data payloads and properties. (‘Popularity’, in this case, is based on user numbers, API call volume and how long the institution has been in the CDR scheme).

St. George Bank ranked first among the 11 banks, providing the most complete payload of data (96 per cent), while NAB (69 per cent) and UBank (73 per cent) trailed the pack.

Six out of the 11 Data Holders (CBA, Up, ING, Macquarie and Suncorp) also provided more than 90 per cent of all data for transaction accounts. 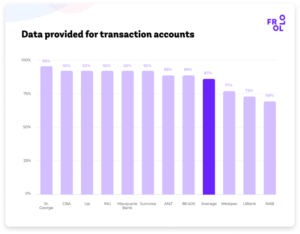 While Data Holders were deemed fairly reliable in their delivery of CDR datasets (with 15 out of the 26 selected data properties delivered completely), there were nevertheless some quantitative categories where information appeared to be missing: for instance, APCA numbers (provided by only 27 per cent of Data Holders), nicknames (provided by 55 per cent), merchant names (provided by 64 per cent) and product features (also at 64 per cent).

Properties related to billers were also provided by fewer than three out of four Data Holders, while biller code and biller name were both provided by 73 per cent.

The critical properties of Transaction ID, Account ID, Type, Status and Description were provided 100 per cent complete by all banks across the December 2021 and February 2022 assessment period.

A data-sharing ecosystem, the Consumer Data Right (and its first phase, commonly known as ‘Open Banking’) scheme is designed to seamlessly share – at their customer’s request – product and transaction information between institutions, creating, it is hoped, more competition between service providers as well as better, more personalised services for consumers.

“Open Banking has the potential to offer a rich and deep dataset to build innovative and personalised experiences,” Frollo said in its blog post.

“Though, to build those experiences, it’s important a business can count on the data being available, regardless of which Data Holder the customer connects to.”

Frollo, a fintech which specialises in supporting businesses with Open Banking/CDR adoption, tracks all Data Holders that are ‘Active’ in the CDR registry.

A total of 73 institutions are registered as ‘active’ Data Holders in the CDR scheme, with Frollo providing data on those with the most active API calls.