Bankwest’s ‘great leap forward’: how a Spotify-inspired operations overhaul has made a challenger into an innovation powerhouse 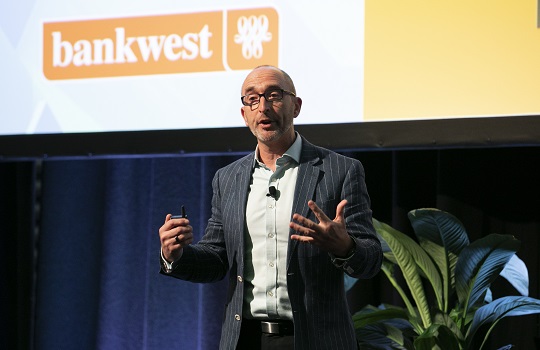 Tribes, by their nature, are fiercely protective of their own, and ruthless in their collective will to survive and thrive. For Bankwest, the tribe represents the supreme model for innovation, product development and delivery.

While most banks approach innovation with a tentative ‘toe in the water’, often creating segregated newcos or innovation labs walled-off from the rest of the business, Bankwest’s Spotify-inspired, Agile-like operating model was a decidedly ‘deep end first’ dive – one that the CBA-owned bank adopted with wholesale vigour.

Indeed, Bankwest CIO, Andy Weir, believes a half-hearted, incubator-first approach is “doomed to failure” as rival claimants to the innovation crown, or simply digital laggards, “[conspire] to kill” off these efforts. For Weir, it is all in or nothing at all.

“We were absolutely adamant that this was the way to go and, therefore, the only way to go was to transform the whole organisation in one go,” said Weir, explaining the bank’s two-year transformation journey at FST’s Future of Financial Services, Sydney.

This new Agile-adapted operating model, christened Blaze, saw the Bankwest “entirely reconstitute its key disciplines” into separate, at times competing, ‘tribes’. While outsiders have been quick to label it ‘Agile’, the Bankwest model appears more a hybrid child of several development methodologies, “taking the best out of Agile, Lean Startup, and Six Sigma”, Weir said.

“The word [tribe] is very important… It evokes belonging: ‘This is my group. I belong here. We have shared outcomes. We all believe in the same thing and we want the same outcomes’; and, in our instance, each tribe is set up with a distinct set of customer outcomes that they’re there to deliver against.”

Each tribe is purposefully multidisciplinary, including a motley crew of software engineers, product specialists, data scientists and UX experts.

These teams are “predicated” on rapid feature delivery, said Weir. Today, these teams are averaging 26 production deployments each month, up from just a single monthly deployment before the adoption of Blaze.

“These are the types of stats that digitally native organisations are able to deliver against,” he said.

For Weir, the secret to delivering at pace is the ability to give multi-skilled tribes complete ownership over their innovation agenda, without recourse to buck-passing or getting bogged down in the inefficiencies of an amalgamated, ‘big-tent’ development model.

“The reason they can do that is that you’re basically not trying to optimise the handoffs between functions. You’re blowing them up and dissolving them, getting rid of them totally, and putting people together that you need to actually deliver the outcome that you want,” he said.

Being tribe-bound also invests each member with much greater personal accountability for a project’s development, funding, and deployment.

“Once you’ve got a multidisciplinary group put together that actually owns that end-to-end experience and everything involved around the delivery of that experience, suddenly things like systems ownership and process ownership becomes so much easier to manage.”

To reduce formal business cases and potential misallocation of funds, Bankwest has adopted a persistent funding model for its tribes. Individual tribes, Weir believes, are ideally placed to identify where and how they want to allocate those funds; they must make “priority calls” on their funding and outline distinct outcomes they wish to achieve.

“The tribes just can’t go off and build shiny new toys and shiny new experiences. They also have to invest in the upkeep, the maintenance, and the health of their systems,” Weir said.

While he acknowledged outsiders’ concerns over known operational risks stemming from Agile processes, Weir said that the tribes model has, in fact, “markedly increased our systems health and our operational risk performance.”

“The tribes and the platforms are accountable for the health of their systems as well as the experiences that are actually building, rather than leaving it to somebody else or throwing that problem over the fence for somebody else to deal with.”

The success of the tribes model has been manifest for Bankwest. Today, the bank has become one of Australia’s most innovative digital product developers, yielding several ‘industry firsts’ and some surprise hits among consumers.

The bank indeed became the first in the world to release in-app messaging service – a feat many in the big four are still struggling to deliver.

“You can go on within the app and have a WhatsApp-style message [or] a Skype-type conversation with one of our agents – and that is there in perpetuity… so you can keep that conversation going.”

The service was immediately popular with Bankwest customers, going from “zero chats to 40,000 in the first month,” Weir said.

Even more tangible fare, such as the wearable Halo payments ring – an Australian first and another direct product of the tribes development model – has also proved a “phenomenal” and somewhat surprising hit among Bankwest customers.

A report by the bank in January this year showed the ring already represents more than a quarter of all contactless payments by Bankwest customers.

Innovation reigns from the cloud

While Weir was quick to emphasise the importance of cultural transformation as the vehicle for the Blaze’s successful rollout across the company, technology is valued equally as the engine of innovation for the tribes.

The launch of Bankwest’s cloud-native digital platform, which has since been overlayed with several API-backed development platforms, has given tribes true “self-sufficiency” in their innovation ecosystems, according to Weir.

Automation through cloud-native processes has further increased the teams’ lead time to change and drastically decreased speed to market, a process that has “reduced handoffs by optimising their deployment processes”, Weir said.

“Our cloud-native platform now has the capability to build and launch a new feature in less than an hour in an automated way.”

“From an organisational perspective, the challenge for us is how do we push more and more of our legacy architecture and stack onto that cloud-native platform.”

A trail blazed – lessons from the frontline

While Blaze, overhaul, has proved a resounding success for Bankwest, Weir admits it was not without teething issues.

“When we announced we were going down this tribe and chapter platform model you know people were high-fiving, dancing in the streets. ‘This is amazing. We’re going to change the world. We can blow up all the existing bureaucracy!’.”

“And of course, when we went live, the engagement went backwards because [staff] saw it as a panacea and, of course, it wasn’t. Systems theory being what it is, as soon as you change a bunch of things, you have a load of other consequences that come out the other side.”

“But what we’ve seen since we’ve gone live and since we’ve tackled and improved a lot of things, our colleague engagement levels have gone up by around about 15 per cent in just 12 months through operating in this way.”

Having his time again, Weir said, first and foremost, he would urge a much quicker development cycle and launch for Blaze – effectively “learning on the go”.

Taking just over a year from go to launch, Blaze initially went through a rigorous process of consultation and modelling with staff; yet the protracted wait time saw initial enthusiasm for the scheme give way to fears over the disruptive consequences post-implementation.

“[We were] going from a holistic view of [staff] being excited about a new way of working to fundamentally ‘what’s it going to mean for me?’. And we didn’t think that through,” Weir said.

“Trying to design to the nth degree a very complex adaptive and iterative model, which even if you try to design to 100 per cent, you’re not going to ever achieve. In retrospect, we probably could have designed less gone earlier and learned quicker.”

Weir also emphasised the importance of top-down support for the scheme, seeking the active involvement of executives in the running of the program, making them ”personally invested in its success”. He likewise stressed the critical importance of codesign, effectively inviting in Bankwest’s extended leadership team in to work alongside developers – something he admits was done far too late in the implementation process.

Finally, while such an ambitious transformation program can tempt executives to demand skillsets from beyond the business, Weir advises chiefs not to overlook hidden talent from within.

“We fell into a trap a little bit at the start of thinking we’re going to need a whole bunch of new people because this is such a big change for our organisation.”

“Until you create it then you’re never going to know.”