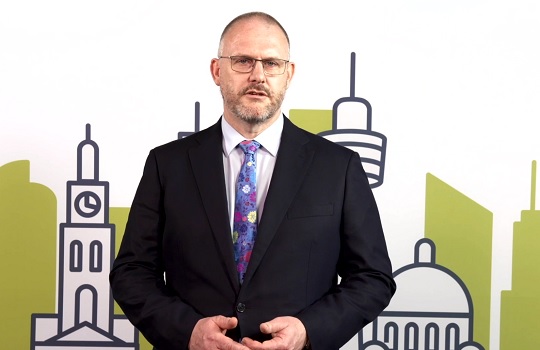 Paul Franklin speaking at the Future of Financial Services 2020 event

Chief of Australia’s Consumer Data Right (CDR) has confirmed the Australian Competition and Consumer Commission (ACCC) could lose jurisdiction of the CDR to Treasury, contingent on legislation to hit parliament.

Speaking at FST’s Future of Financial Services Sydney event on Thursday, the ACCC’s Paul Franklin, executive general manager of the Consumer Data Right, said the Government has proposed moving core functions of the regime, including rule-setting and the power to designate future sectors admitted to the scheme, under the direct authority of Treasury, potentially giving the Government more leverage to determine the shape of the CDR framework and the speed of its rollout.

However, Franklin stressed, the rulemaking function will remain with the ACCC “until that legislation passes”.

Should ownership of the scheme be transferred to Treasury, Franklin assured, all processes “should continue without any interruption”.

“We’ve got a plan with Treasury which says that the rulemaking function will continue in a very seamless way, whether that legislation passes. [If it does], we’ll hand that over to Treasury.”

Draft legislation, put forward for public consultation, had the flagged the potential of shifting overall responsibility for the CDR from the ACCC to Treasury. This could be place-holder, however, with the Senate Select Committee on Fintech and Regtech also proposing the creation of a new data regulator to manage all aspects of data policy.

Franklin did acknowledge the Committee’s proposal for a “single regulator”, accepting that new frameworks like the CDR often face intense scrutiny and are frequently subject to the whims of machinery of government changes.

“It’s not surprising that, for a brand new regime like the consumer data right, there might be changes to arrangements over time.”

“We’re very interested in that proposal but, at this stage, it’s just a draft recommendation and we’re interested to see where that ends up.”

He added: “I’m very proud of [our team at the ACCC]; it’s a very capable team, so if there is a move where that team or other changes to arrangements, I’m sure it will be managed in an acceptable way.”

The Senate Select Committee, chaired by Senator Andrew Bragg (a fellow keynote speaker at the 2020 Future of Financial Services event), deemed the regulator a less-than-ideal choice for overseeing the CDR, which is expanding at pace. The proposal to create a separate data regulator is also backed by peak industry bodies Australian Banking Association and FinTech Australia.

Consumer uptake of CDR-based services will, Franklin said, be contingent on a substantial increase in the number of accredited data recipients (ADRs) active in the scheme – with ADRs effectively providing the front-face of the CDR, offering services to consumers based on the consumer data they have received.

While the supposedly laggard accreditation process has faced criticism in some circles, Franklin assured that the regulator has “built good processes” to manage the application load.

“Our experience is that for all organisations we’ve accredited, there’s a little bit of a back and forth to clarify information, so we’ve put out additional guidance to help them.”

However, he stressed, “once we have the final information that we need, it’s really only a couple of weeks to grant the accreditation. So, it’s quite a quick process.”

Franklin said the regulator is prepared for an influx of applications and, moreover, is “very keen to get more accreditation applications in”.

“We have capacity to bring extra resources on as needed. If we got a sudden dramatic increase in the number of applications, quite honestly that’d be a great problem to solve.”

He said he remains “very happy with the solid pipeline of applications”, with a “good number of very credible businesses… looking to gain accreditation”.