Innovation shift sees Australia on the brink of startup success 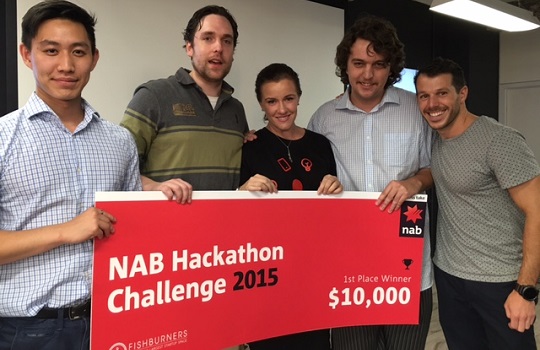 Australia’s endemic, risk-averse culture has stunted the extent of our innovation in financial services, with the significance of startup hackathons historically under-appreciated.

Australia’s endemic, risk-averse culture has stunted the extent of our innovation in financial services, with the significance of startup hackathons historically under-appreciated, according to Fishburners’ General Manager, Murray Hurps.

Having conducted their hackathon challenge last month in partnership with National Australia Bank (NAB) and Fusion Labs, Hurps affirmed that increased exposure to successful Australian startup stories has now prompted a shift in our cultural acceptance of risk as fundamental to innovation.

“Sixteen years ago, Sydney was a terrible place to run a software company [but] it’s rapidly getting better,” Hurps said.

“It’s really interesting because we’ve always had the capital, the talent, a stable business environment and access to markets – especially Asian markets – but it’s only in the last couple of years that it’s really taken off in terms of people seeing the opportunity and taking it.”

Hurps said that hackathons are a “wonderful way” to bring together developers, designers and entrepreneurs, with the NAB Hackathon Challenge focussed on teaching “lean methodology” and “rapid prototyping”.

The winning entrant, NAB Saver, drew on the bank’s Application Programming Interfaces (APIs) to present a solution advocating for a new approach to customer transaction data. This involved an analysis of everyday customer purchases and exploring non-traditional partnerships to deliver tailored discounts to customers based on their past spending habits – including utilities such as gas and electricity, as well as other subscription-based expenses – to help negotiate a “better deal” for customers as well as provide them with an array of targeted offers aimed at building loyalty.

The team have now formed a startup under the name ‘Back Alley Innovations’ and are presently in discussions with a variety of banking institutions and traditional financial incumbents to commercialise their product in the market.

“We’re having the collaboration conversations with banks and vendors,” said co-founder, Justin Liang.

“Simultaneously, we’re speaking to customers to more precisely understand their needs and spending behaviours. These insights then help us refine our analytics models and user experiences that we can then further roll out and test.”

Liang said that hackathons provided an opportunity for “co-education”, with banks supporting startups to provide “new solutions” for customers and entrepreneurs gaining greater visibility to cement their place in the market.

“We all know and love to discuss the big success stories – [including] Tesla [and] Alibaba…but you only hear about the ones which succeed, but there are graveyards and graveyards of ideas [that have failed],” Liang said.

“You can have an [innovative] idea, but a lot of the time it isn’t just about reinventing the wheel, it’s about making the wheel better.”

According to Hurps, the support from the federal government for innovation at a national level signalled a shift in the conversation surrounding the significance of Australia’s startup ecosystem to the nation’s financial services sector and was “perfectly timed”.

“I think that we have all the ingredients here to do incredible things and the only thing that is stopping us currently is people who aren’t aware of it or aren’t tolerant of that kind of risk,” Hurps said.

“Honestly, it’s a cultural change that we need and I think that’s coming.”