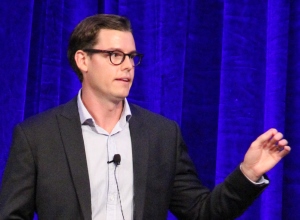 Machine learning is set to usher in the ‘next evolution of the internet’ say industry insiders. Cameron Haynes, Senior Industry Analyst at Google, reveals that next-generation ‘smart machines’ are already bearing fruit for insurers.

Speaking at the FST Future of Insurance conference, Haynes said we’ve reached an evolutionary confluence between three technologies critical to the wider application of machine learning across industry.

“The algorithms have been around since the 60s,” Haynes said, “but we’ve never had the abundance of computing power that we’ve had now, and we’ve never been able to clean out data to the point where we can deliver actionable insight off that data.”

“Analysing huge data sets was always the biggest challenge,” he said. “We’ve finally reached a point where we can put machine learning algorithms to work.”

While still a nascent technology, Google has already teamed with insurers in the US to take advantage of machine learning’s early insights into customer behaviour.

Progressive, one of North America’s largest automotive insurers, deployed machine learning on their struggling web app, not only to understand why it failed to resonate with customers, but also to identify specific points within the app that could better meet customer demands.

However, organising the enormous volumes of unstructured customer data generated by the app remained a challenge, requiring some initial investment by the organisation.

“[Progressive] had a huge amount data, but they couldn’t really read it, Haynes said. “So they made some investments in enterprise systems and put all of their data in a format that could be easily read and translated using BigQuery Google Analytics and they started to understand the user behaviour within that app.”

In adopting the machine’s algorithm, Progressive increased their app sign-ins by nearly one third, whilst also taking away “valuable learnings about what consumers want from an app from an insurance company,” Haynes said.