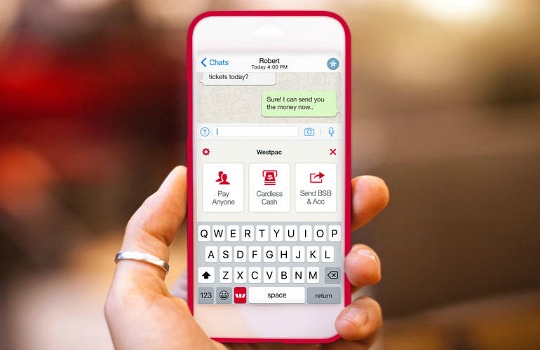 Westpac has this week announced the launched of a mobile experience to allow customers to access banking features while using social apps including Facebook Messenger, Twitter, and Snapchat.

Data collected from Westpac showed close to 11 million people were active users of messenger apps in Australia across multiple platforms, while 3.4 million relied on them as a primary form of contact.

The new solution, to be called Westpac Keyboard, would aim to merge online banking into the ‘everyday’ of the consumer.

“With SMS and social messaging apps now an everyday part of our lives, it was time to close the gap between social media and mobile banking,” said Westpac group chief executive, consumer bank, George Frazis.

“We really want customers to be able to access their money in an efficient and convenient way, particularly when they socialise.”

Frazis said the launch had pushed the traditions of mobile and online banking and would allow banking features to be used through Facebook Messenger, WhatsApp, Snapchat, Twitter, and WeChat.

Westpac Keyboard would be available to customers using iOS devices running iOS 9.0 or above.