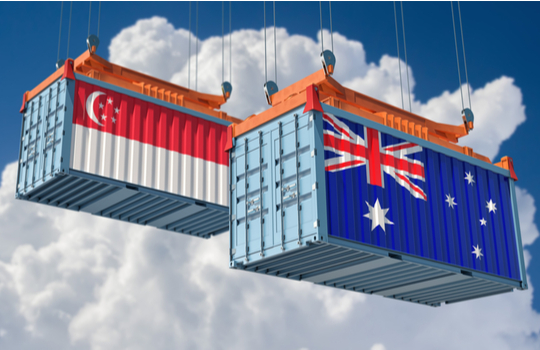 The Australian Border Force (ABF) has confirmed it has successfully “pioneered” a new cross-border blockchain system with its Singapore counterparts, enabling expedited trade document verification between the two states.

The trial was initiated as part of a wider Australia-Singapore Digital Economy Agreement, confirmed in late 2020, aimed at simplifying cross-border trade between the two countries.

The new blockchain-based system set out to prove that digital trade documents, namely Certificates of Origin (COO), could be instantly authenticated, provenance-traced, and digitally processed between the two states’ customs authorities.

One of the key proofs of the trial was the acceptance of verifiable COOs by Singapore Customs.

COOs certify the place of growth, production or manufacture of goods, proving authenticity and integrity. The certificates are required when exporting to specific countries, when requested by the consignee for customs clearance, or when stipulated in a letter of credit.

The Certificates are still overwhelmingly issued on paper, with businesses regularly waiting days to receive the hard-copy document via courier before dispatching to multiple parties, including customs agencies, brokers, and banks.

According to the ABF, by enabling this blockchain-based, decentralised approach, cross-border trades could ultimately be made more cost-effective. The platform, it said, “offers scalability without the need for expensive data exchange infrastructure, lowering barriers to the adoption of paperless cross-border trade”.

He noted that the digital verification process could prove a “circuit-breaker” that “[disrupts] persistent paper-based evidence required by authorities”.

As part of the trial, QR-codes embedded with unique proofs were inserted into digital COOs, “enabling immediate verification for authenticity and integrity of the document when scanned or machine-read”.

The ABF’s own IGL platform, which is still in a proof-of-concept stage and itself built off the TrustTrust framework, is designed to transition the ABF from paper-based processing, ultimately reducing cross-border transaction costs for Australian business. The transition to the new platform is a key priority of the Federal Government’s $28 million Simplified Trade System reform agenda.

Digital COOs are the first test case for the IGL.

Singapore is Australia’s largest trade and investment partner in the ASEAN region and its sixth-largest trading partner overall, accounting for $27 billion in two-way trade in 2020, according to DFAT.

Alongside the Singapore-Australia Free Trade Agreement (SAFTA), confirmed back in 2003, the pair last year entered a Digital Economy Agreement (DEA) which aims to harness digital transformation and technology to expand trade and economic ties in our region.

“The DEA upgrades SAFTA’s Electronic Commerce chapter through a new Digital Economy chapter, providing modernised trade rules that assist businesses and consumers to engage with and benefit from digital trade and the digital economy.”