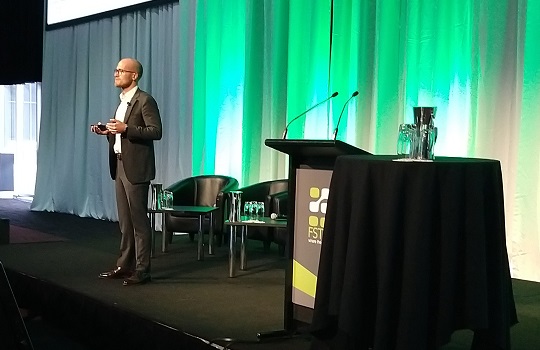 Speaking at the FST Government Australia conference in Canberra last week, Estonia’s data chief, Ott Velsberg, said governments should not shy away from “practical” experiments with AI and machine learning (ML) technologies within the public sector, suggesting regulators should be invited in only “when the government finds a need”.

He pleaded with delegates to keep the regulators at bay, believing governments may tangle themselves in red tape too early in AI’s development phase – before genuine use cases can be determined.

“Let’s try things out and only then consider [regulation],” he said.

With 25 unique use cases for ML or AI currently in play, Estonia remains among the vanguard innovators in not only digital but ‘predictive’ government – widely seen as the next evolution in eGovernment. Predictive government, which leans heavily on AI-backed systems, effectively gives public agencies the ability to service citizens’ demands (for example, automatically registering a child’s birth, mailing out an ID card, or receiving a government pension) before an individual even thinks to make the request.

The strategy is key to Velsberg’s push to make Estonia’s Government “proactive, personalised, and… in the background” of its citizens’ lives.

Yet, to do so, he believes public sector agencies should not just be passive adopters but active developers of AI technologies.

Estonia has purposefully adopted a proactive AI implementation strategy, deliberately skirting moral debates around the disruptive impact of the technology – something Velsberg frets may hinder the progress of AI development within Australia’s public sector.

Such moral questions, he believes, can only be fully resolved after the technology has been deployed and tested in a practical setting, with Velsberg advocating “the full uptake of AI throughout government”.

The outward success of Estonia’s AI deployments pays credence to Velsberg’s ‘adopt-first, evaluate later’ approach. (This, despite his obvious reservations over a recent, though failed, push by Estonia’s government to give artificial intelligence status as a separate legal entity – alongside individuals and companies.)

He cited a recent example of an AI-backed job profiling scheme (used by the government’s employment agency to determine an unemployed candidate’s suitability for particular jobs), which has seen employee retention rates soar by nearly 30 per cent since its deployment just six months ago.

He nevertheless cautions government officials to temper their expectations around AI. Rather than it being a panacea for all challenges faced by the state, it should be seen, first and foremost, as a tool to automate and increase the efficiency of public services. As it develops, it should guide the next evolution of eGovernment – one that, as Velsberg restates, should be “proactive, personalised, and [unobtrusively] working in the background” to serve its citizens.

Data sharing, and what’s more data hygiene, have been critical to the rapid expansion of Estonia’s eGovernment program. Through its widely praised open data exchange layer, X-Road, the government has not only spurred the public’s ready acceptance of a highly integrated digital eGov service network, but have also successfully gained its trust to protect and use their data.

Government agencies depend on a perennial stream of high-quality data to feed their analytics and AI algorithms; these are critical to supporting their rich mix of whole-of-government digital services.

“It’s not only about the workforce, or the public sector, but the nation as a whole. Data hygiene is extremely important. Understanding how data can be used to benefit the citizens at the [level of] government. It’s priceless.”

Yet, maintaining data quality and ensuring the public trust in the ethical use of their data have not been easy wins for the Estonian Government.

Estonia has attempted to meet these challenges head-on, recently introducing independent ‘data stewards’ within public agencies to monitor the quality and use of citizen data.

Stewards are directly responsible for upholding data quality and ethical standards, as well as ensuring citizens are minimally impacted by the government’s sourcing and use of their data.

“It’s about understanding what type of data we have… [and] about clear and honest principles that everyone understands,” Velsberg said.

“We have a principle of ‘once only’: if the government has already collected data on a citizen or on a company… then we shouldn’t ask for that information twice.”

Trust and transparency are core to Estonia’s eGov program. The government has thus actively embraced a privacy-by-design principle in all digital government rollouts.

“In Estonia, you can see when the government accesses your data. You can see the reason why the government has access to your data. It’s really about transparency. We also truly believe that citizens should have a say over how their data is being used.”

The success of Estonia’s widely acclaimed eGovernment rollout – which, according to Velsberg, represents 99.99 per cent of all government services today – is predicated on citizens being able to actively engage with their government. For Velsberg, this engagement is vested in the universal acceptance and uptake of the state’s national ID scheme.

Estonia’s existing digital government framework would, Velsberg believes, be unworkable without the universal adoption of the national identification card.

From the age of 15, Estonian citizens are issued with a compulsory ‘ID-kaart’. Upon issuance, citizens are also automatically added into the state’s eGovernment database, consolidating their data into a single repository for use by state agencies.

Refusal to do so would mean a citizen is effectively cut off from critical public services.

There are indeed few, if any, alternatives for noncompliant citizens who wish to remain ‘off-grid’, and few options to wipe their digital footprint clear on government servers.

Even basic services and rights, such as collecting a medical prescription at a pharmacy or simply voting in state elections, are now directly linked to an individual’s ID card.

“We like to think that everyone has a say in every matter. No. If you want to be part of the society, if you want to make your life better, then you need to have the digital or ID card,” Velsberg said with uncompromising candour.

“If you really want to access some services in-person, you still have that possibility. But I [have to] be honest, it’s burdensome, it takes more time, and we make sure in every possible way that you don’t enjoy it.”

Yet, while the universal ID attracts little controversy in the tiny Baltic state, for many Australians still conscious of the ill-fated attempts to introduce a national ID, such a scheme may, for now, prove a bridge too far – though, many agree, it is a bridge that must inevitably be crossed.